Fannie Mae‘s FNMA -0.37%national housing survey for September showed 37% of respondents expecting house prices to go up in the coming year – the highest level since the survey was launched in 2010. That number has more than doubled in the past year: just 18% believed the same thing in September 2011.

Few are expecting a bull market – the average expectation is for home prices to rise by 1.5% – but there increasing confidence that homes will retain their value or appreciate. Just 11% of people now think house prices will go down, compared to 25% a year ago.

One big part of the equation is mortgages: it looks like heavy messaging from the Fed about low interest rates stretching out to the horizon has made a dent in the public consciousness, with a notable move in expectations about mortgage rates:

That expectation of steady, or lowering, mortgage rates, combined with an increasing belief that prices will rise, feeds into an equally notable shift in overall views of the country’s economic direction. The majority still aren’t happy, but the gap is shrinking fast:

Big builders have been claiming there is a housing recovery underway, although many in the markets are not buying it. But numbers like this are making it increasingly hard to deny there is a recovery in sentiment, if not action.

Vacancies declined at U.S. malls and held steady at strip shopping centers in the third quarter as landlords attracted new retailers to fill space as stalwarts such as Best Buy Co., Staples Inc., Gap Inc. and Office Depot Inc. closed stores or shifted to smaller ones.

Malls in the top 77 U.S. markets posted an average vacancy rate of 8.7% in the quarter, down from 8.9% in the second quarter, according to new data from real-estate research company Reis Inc. The latest figure is a notable step down from the recent high of 9.4% set in last year’s third quarter.

Mall rents, meanwhile, continued their slow rise, climbing 0.3% in the third quarter from the previous quarter to an average of $39.24 a square foot per year, according to Reis. The increase marked the fifth consecutive quarterly increase for malls, a group that includes large, enclosed shopping centers typically anchored by department stores. 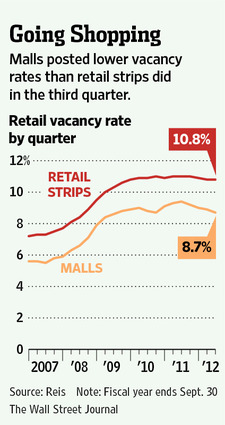 Retail strip centers, which are smaller than malls and feature several stores facing a common parking lot, typically with a grocery store as an anchor, didn’t fare quite as well. Their vacancy averaged 10.8% in the third quarter, unchanged from the previous one, Reis said. That rate is only slightly less than the recent high of 11% in last year’s fourth quarter as well as the 32-year high of 11.1% in 1990.

Rents at retail strips increased by 0.1% to $16.57 per square foot per year, marking the third consecutive quarter of razor-thin increases in that sector.

Shopping centers have struggled to rebound from the economic downturn, while facing competition from Internet rivals as well as a huge overhang of new development from the boom years. Rental rates for most shopping centers remain far below levels seen during the boom, a sign of the upheaval from the closing of big-name retailers.

But landlords have been helped by a dearth of new retail space in the U.S. Also, while some chains are contracting, others are expanding.

Space is being filled by stores such as TJX Cos. Inc.’s TJ Maxx and Marshalls, Nordstrom Inc.’s Nordstrom Rackand Lululemon Athletica Inc.

Even big-box centers, home to many retail chains hardest hit by online sales, are showing signs of a rebound. Big-box centers in the top 54 U.S. markets posted an average vacancy of 6.4% in the third quarter, unchanged from the second quarter and well removed from the measure’s recent high of 7.9% in 2009, according to the CoStar Group, which collects and analyzes commercial real-estate and economic data.

Big-box lease rates, however, averaged $17.27 a square foot per year, far less than the recent high of $21.48 hit in 2007. “To me, it suggests that this (big-box) sector is doing OK, but not great,” said Suzanne Mulvee, CoStar’s director of retail research.

Write to Kris Hudson at kris.hudson@wsj.com